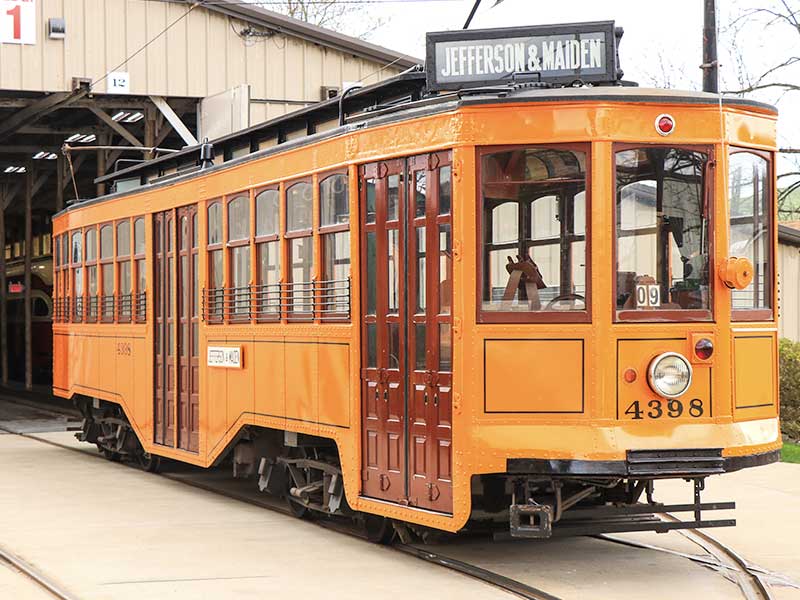 For more than 40 years, the trademark of the Pittsburgh Railways system was the “yellow car.” In the years from 1910 until 1926, more than 1,000 cars of this type were built for service in Pittsburgh. Of those cars, only two survive today here at the museum.

These cars are technically known as the P.N. Jones low floor car, after the Pittsburgh Railways General Manager who urged his former colleagues at Westinghouse Electric Company to develop smaller motors that would fit on the wheelsets (trucks) of a car having 25″ wheels. This significant development permitted Jones (and all that followed) to engineer a car with fewer steps for passengers getting on and off the car. This in turn speeded the loading and unloading of the car, reducing accidents and decreasing running times. Because of Jones’ pioneering effort, thousands of low-floor cars were ultimately built for systems throughout North America. Pittsburgh Railways had 1,056 yellow cars, built to the same basic design by a variety of builders. Of these, 618 were single-ended, 213 were double-ended and the balance were trailer cars.

Pittsburgh Railways 4398 is an example of the double-ended low floor car. Cars of this type need no loop track on which to turn around at the end of the line. In reversing a double-ended car, the operator places the trolley pole on the wire at what has been the front, picks up his control handles, changer, fare box, cash box, cap, lunch, transfers, etc. and carries it all to the other end of the car. There he replaces all the moveable parts on their mounts, pulls down the trolley pole at that end, and is ready to return.

In the early days, most streetcars were double-ended. In later years, operational efficiency relegated most double-ended cars to short shuttle or “dinky” lines, which connected with through-routes to downtown. Today, many of the new light rail operations – including the one in Pittsburgh – have rediscovered the flexibility of double-ended equipment.

Car 4398 was one of the last such double-ended cars used in revenue service, operating on the 99 Glassport-Evans Avenue line until 1952. Nearly identical cars were the mainstay of local operations in Washington, PA. After removal from service, 4398 was one of a handful of cars held for emergency service until 1956.

In 1977, 4398 was taken out of service at the Museum and restoration commenced in 1979. Unfortunately, the scope of the work required could not be sustained by the limited volunteer workforce. Over time, focus waned until work ended in 1988 with the car remaining partially completed inside the shop. In 2004, the restoration resumed with new funding, volunteers and a full-time paid contractor over seeing the job. Work on the car was completed and 4398 was returned to service at the Museum for the 2011 season.