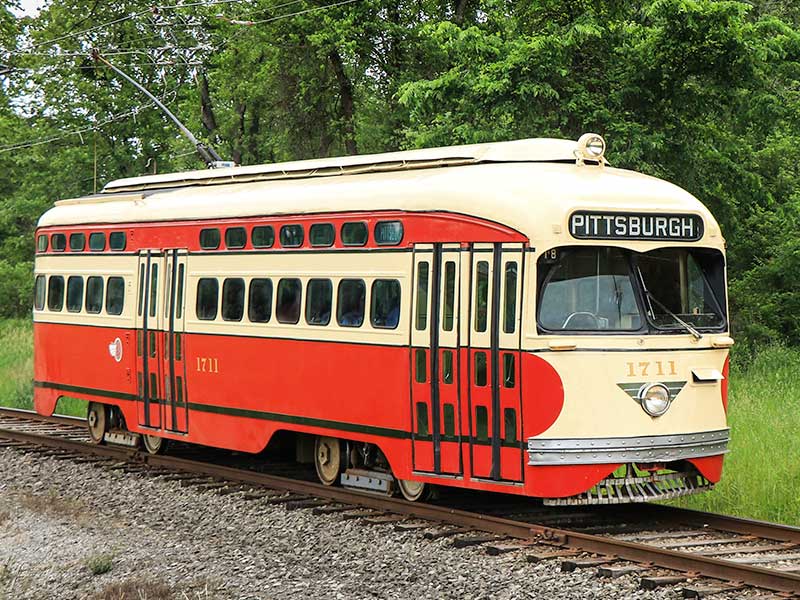 Pittsburgh’s newest PCC cars were unquestionably the most distinctive. These last 100 units, delivered in 1948-49, differed in many ways from the cars that had come before them. From the outside, the most distinctive changes included the sealed windows (to prevent accidents) with small standee windows (windows for standing passengers) in a row above. On the front of the car, bright triangular wings again outlined the headlight and small dash lights flanked the top corners. On the roof, a cowling running the length of the roof provided intake for the car’s ventilation system. Inside, a new seating arrangement allowed all of the passengers to face forward, while four large Sturtevant fans punctuated the ceiling, providing fresh air in lieu of openable windows.

A special group of 1700s (numbers 1700-1724) were equipped with special running gear for service on Pittsburgh Railways’ long Charleroi and Washington interurban lines: a package shelf in place of the first seat behind the operator, a ticket printer, an emergency tool kit, a spare trolley pole secured in special brackets on the roof and a roof-mounted headlight. After acceptance, 1711 was one of seven cars assigned to Tylerdale car house in Washington. It was chosen for preservation at PTM because it operated on the line which became our museum home, and also because it was historically significant as the last car to carry regular passengers from Washington to Pittsburgh early on the morning of August 30, 1953.

Car 1711 was retired from active service in August 1988, and acquired from Port Authority Transit in April 1990. On the way to the museum, 1711 was detoured to the BarrCannon Body Company in Meadowlands, PA, where workmen overhauled it inside and out, under the watchful eye of founding member George Tucker, who also generously donated the cost of the work performed.

Subsequently, 1711 was sent to the Adtranz (now Bombardier) facility in Elmira, NY for a complete structural rebuild. During that process, the interior was restored to the original 1949 appearance.