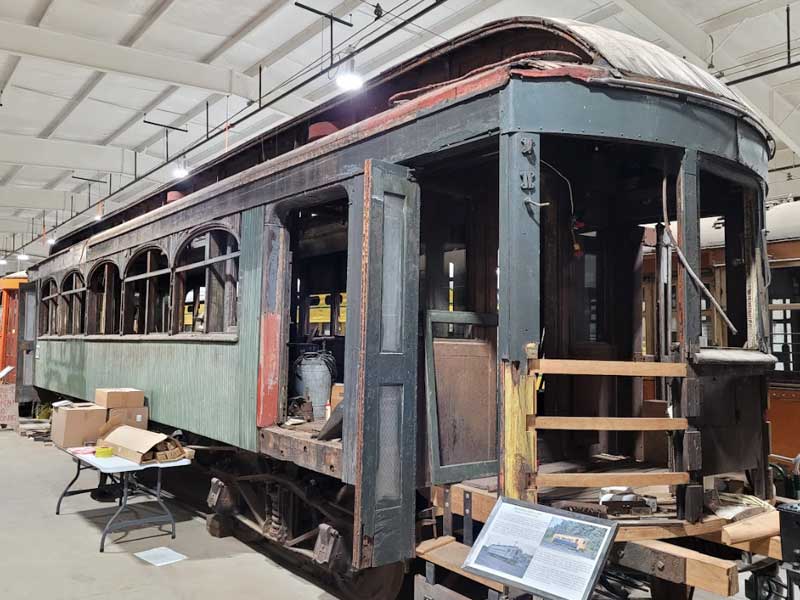 Car 250 is a classic wooden interurban car built with arched stained glass windows and varnished woodwork by the Jewett Car Company of Newark, Ohio. It was a “combine” car, designed to carry both passengers and freight, and was used originally by the Monongahela Valley Traction Company (MVT). The MVT built a significant interurban passenger and freight business that ran from Rivesville, WV south through Fairmont and Clarksburg to Weston, on a system that connected both large and small towns in north central West Virginia. This line was later purchased by West Penn Electric as the Monongahela West Penn System, and finally was owned by City Lines of West Virginia in 1944. #250 was used on a number of rail enthusiast trips and was donated to Shore Line Trolley Museum by City Lines in 1947.

PTM greatly appreciates the generosity of the Shore Line Trolley Museum in East Haven, CT for donating this car to PTM for preservation and interpretation. Car 250 is an important addition to PTM’s collection because it represents the classic small-town interurban car that was once common in the United States. It linked Clarksburg, Fairmont and Weston for 34 years. It joins another interurban car from the same company, car 274, and a 54-ton electric locomotive, 3000, already preserved at the Museum and on display in the Trolley Display Building. Currently volunteers are rebuilding the end of car 250 in place at the Trolley Display Building. Long term hopes are to operate the car on the two-mile long Museum demonstration trolley line.