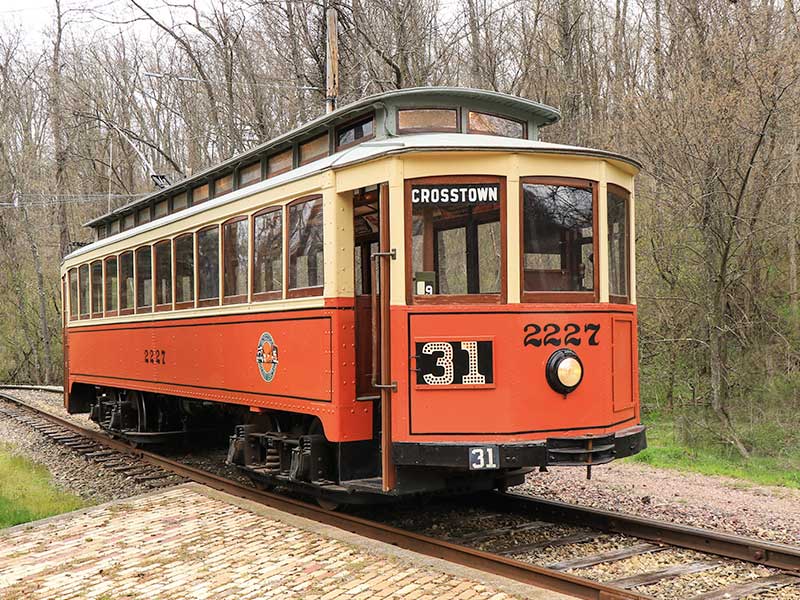 Car 2227 represents the standard design used for Cincinnati streetcars built between 1911 and 1920. PTM acquired 2227 from the Lake Shore Electric Railway Museum in Cleveland (successor to Trolleyville, USA), where 2227 had been operated, displayed and restored for many years. Car 2227 was originally preserved by a group of rail enthusiasts in the Cincinnati area. What follows is the story of how the car came to be preserved. It was written by Cliff Scholes, a member of the group that preserved the car and whose continued contributions have enabled it to again be operable here at the Pennsylvania Trolley Museum, on tracks of its original gauge.

In 1919, the Cincinnati Traction Company placed an order with the Cincinnati Car Company for 105 double truck closed deck roof cars to be numbered 2200 through 2304. Car 2227, one from this order, was in service for most of the time until abandonment of all streetcar operations in Cincinnati on April 29, 1951. This series of two-man cars served on the heaviest of the lines, including route 31-Crosstown, with its close headway, heavy loads, and operation on the steep hills of the city. For years, it worked out of the Eighth Street car house until early in WWII, when it was moved to the Vine Street car house and operated on route 78. It was returned to Eighth Street after the War, and again operated on route 31 until that route’s conversion to trolley bus on April 11, 1948. Shortly thereafter, at Winton Place shops, 2227 was converted to a sand car, renumbered S-223, and was stabled at Hyde Park car house until abandonment of the streetcar lines operating from there. It was then stored at Winton shops until after abandonment of all streetcar service in the city.

A group of railfans in the Dayton area formed the Dayton Car Riders Association in 1943 and sponsored several chartered trips on the Dayton and Cincinnati streetcar systems. In 1945, the club was reorganized as The Southern Ohio Division/Electric Railroaders’ Association (SOD/ERA). When City Railway of Dayton replaced its streetcars with trolley buses in 1947, an attempt was made to acquire one of its streetcars, but the group was unable to do so.

In 1951, when Cincinnati Street Railway (CSRy) ceased streetcar service, the decision was made to obtain one of that system’s cars. The acquisition of car S-223, née 2227, was accomplished on April 30, 1951, at a cost of $400, donated by 10 members (Tom Scholey, Ben Garrison, Martin Kelly, Pat Carmody, Ed O’Meara, Joe Kepler, Gene O’Meara, Martin Rumel, Don Carr, and John Williams) of the SOD/ERA. Unfortunately, purchase of the car was without motors, as the railway company had asked far too much for the motors, and the car, having been converted to a sand car, had no seats.

Preparation of a rented site off Valley St near Brandt Pike in Dayton was completed with new ties donated by the New York Central Railroad, and 200 feet of rail was purchased for $100 from Finke Engineering Co. Cincinnati Towing Service moved the car from the Winton shops of CSRy to Dayton, placed it on the prepared roadbed and reattached the trolley bases and poles to complete the move. Upon the car’s arrival, reporters and photographers from the Dayton newspapers were there to report the activities. Although a complimentary story was published, the next day, a city inspector arrived with notification the car could not be used as a club house, as it contained no toilets or running water. This was the first of many bad things to happen, as soon vandals broke into the car, stole tools, broke windows, and generally caused much havoc at the site. The sand bins were removed by club members and seats were purchased from a CSRy 2400 type car, owned by an individual, but were never installed.

As time wore on, membership in the club declined drastically for a variety of reasons including military service. Interest in maintaining the car over the next months waned until only a few members remained. But a favorable second newspaper article about the car, the club and its problems prompted Howard Kahoe, village manager of Yellow Springs, to offer a spot on his farm as a home for the car. After much discussion within the club, the decision was made to accept the offer and move the car. Ties were donated by the Dayton Union Railroad and rail was donated by the Pennsylvania Railroad at Yellow Springs. The ties were tossed off the railroad overpass in downtown Dayton, picked up and transported to Kahoe’s farm and the rail was dragged through the streets of the village from near the Antioch College campus to the farm at the south end of the village. Track was laid there so the car could be shipped from Dayton.

Again, Cincinnati Towing Service was contacted and they moved the car to Yellow Springs in October, 1952. Trolley coach seats were purchased from City Transit in Dayton, but they, too, were never installed. Shortly thereafter, the last maintenance done on the car by the club, a coat of roofing tar, was applied. An attempt to renumber the car while at Yellow Springs to its original 2227 was started, but only the “S” was changed to “2”; the “3” was never changed to the correct “7”. (This should clear up confusion one might have in looking at pictures of the car before its restoration.)

In 1957, due to the sale of land the car occupied, Kahoe fastened a bulldozer’s chain to the ties, rail and car, and towed all of it across Hyde Road to other property he owned, where it remained until 1964. In 1963, the car was offered to the Ohio Railway Museum at Worthington and the Pennsylvania Trolley Museum, but both declined the offer due to lack of motors and seats. Later that year, Gerald Brookins of Trolleyville was contacted and he eventually accepted the gift of the car to his operation in Olmsted Falls. On Labor Day, 1964, the car was donated and deeded to Brookins. Later that month, the body of the car was moved to Trolleyville and Brookins acknowledged the gift by letter dated October 11, 1964.

Since the car now had no trucks (they had been left behind on Kahoe’s farm and are now at PTM), standard gauge trucks were sought. Cincinnati Transit had, at its Winton Place shop, a piece of standard gauge work equipment, S-92, used to haul railroad cars of coal from an interchange to the company’s power house. This work car/locomotive had been built by the Company in 1938, and trucks were fabricated using motors from scrapped maximum-traction truck equipped cars. Eventually, the Transit Company was persuaded to donate that car to Trolleyville and it was shipped there. S-92’s body was scrapped at Trolleyville and the trucks placed under 2227. A lengthy restoration was undertaken and the car was substantially restored and first operated again at the Trolleyfest celebration on August 22, 1998. In the years before Trolleyville was closed, many visitors enjoyed riding the only operating Cincinnati Street Railway car in existence.

At PTM in 2010 generous contributions by Cincinnati streetcar fans allowed re-gauging and rebuilding of the trucks so that the car could be put in operation. This work was accomplished with thorough planning and the able assistance of Lyons Industries in Ebensburg, Pennsylvania. In addition PTM volunteers worked over 2000 hours to rebuild mechanical and electrical equipment that have allowed the rebuilt trucks to work flawlessly. The best time to see and ride this car is during special events.

On Display and In Operation